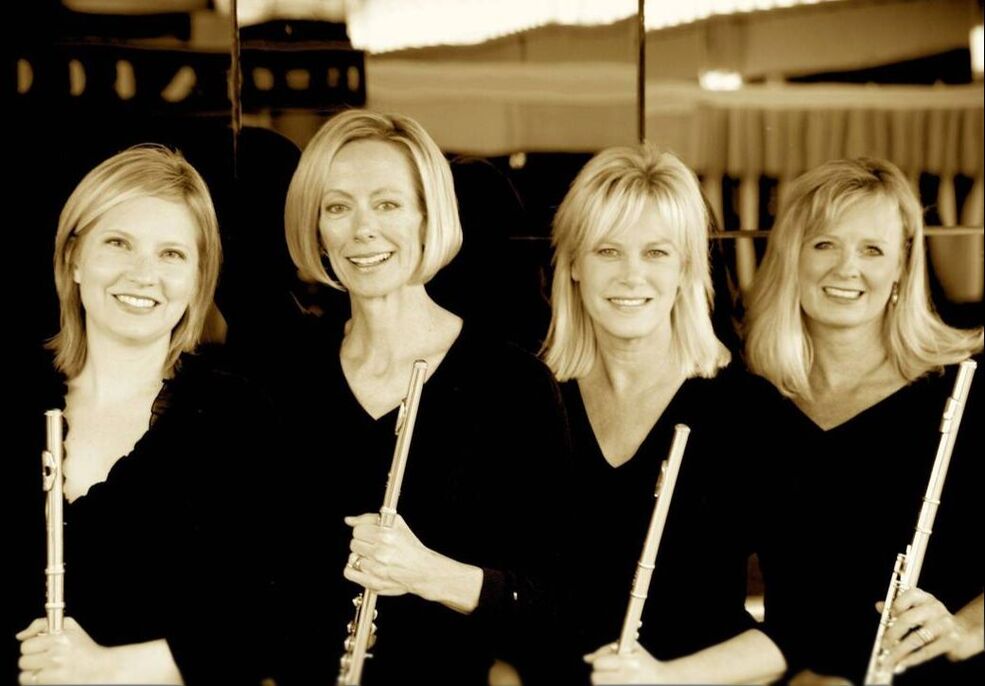 From left to right: Erika Tomten, Peggy Hammerling, Deb Haarsager, Kirstin Carlson
Kirstin Carlson
Kirstin Carlson is a band director at Ben Franklin Middle School in Fargo, ND, and a private flute teacher.   As well as playing with the Silver Winds Flute Quartet, she performs with the Master Chorale of Fargo-Moorhead and is an active freelance performer. Kirstin has played with the Grand Forks Symphony, the Lake Agassiz Concert Band, the Trollwood Performing Arts School as a woodwind mentor/performer, and the Gooseberry Park Players as the pit manager/performer.  She holds a Bachelor of Music degree from Concordia College in Moorhead, MN where she was a member of the Concordia Concert Band and Concordia College Orchestra, and has also earned a Master of Science degree in Curriculum and Instruction from Minnesota State University-Moorhead. Kirstin and her husband are the owners of TAK Music Venue in Dilworth. She lives in Moorhead and adores spending time with her husband, two sons and English Setter.
Deb Haarsager
Deb has been a member of the Silver Winds Flute Quartet since its inception in 2002.  She is a graduate of Concordia College in Moorhead, Minnesota, where she was a member of the Concordia College Band and Concordia College Woodwind Quintet.  Her other musical interests include playing in the Lake Agassiz Concert Band and participating in worship ministry at her church.  Deb is happily retired after working many years as a litigation paralegal in a private law firm.  Deb lives in Fargo, ND with her husband, son and two beagles.​
Peggy Hammerling
​Recently retired, Peggy taught flute and coached chamber music ensembles at Valley City State University in North Dakota and at Concordia College in Moorhead, MN.  She currently teaches in her private flute studio and enjoys working with students of all ages.  Along with the Silver Winds Flute Quartet, Peggy performs with the Fargo-Moorhead Symphony, Fargo-Moorhead Opera and Lake Agassiz Concert Band.  She also directs the St. John's Lutheran Recorder Ensemble.  Peggy holds degrees from Pacific Lutheran University in Washington, Clarke College, and Minnesota State University - Moorhead.   She lives in Fargo and enjoys outdoor activities including hiking and skiing in the area. Peggy and her husband love to travel, and their favorite visits are to see their three grown children and grandchildren.
Erika Tomten
​Erika has performed in numerous music ensembles in the Midwest and Pacific Northwest, and taught private and group flute lessons for over 15 years.  She is a graduate of Concordia College in Moorhead, MN where she studied music and studio art. One of her favorite projects has been performing on the indie rock album White Darkness by her long-time musician friend Aleka. Erika has played flute and piccolo with music ensembles throughout the Fargo-Moorhead area, including the F-M Symphony, Lake Agassiz Concert Band, the pit orchestra for FMCT and the Straw Hat Players, and in the F-M Ballet's production of The Nutcracker.  Along with the Silver Winds, she plays in Sølvtre, a flute, violin and trombone trio. Erika lives in Moorhead with her husband and daughter, and is the Development Director of the Fargo-Moorhead Symphony Orchestra.
Erling Linde, Founder 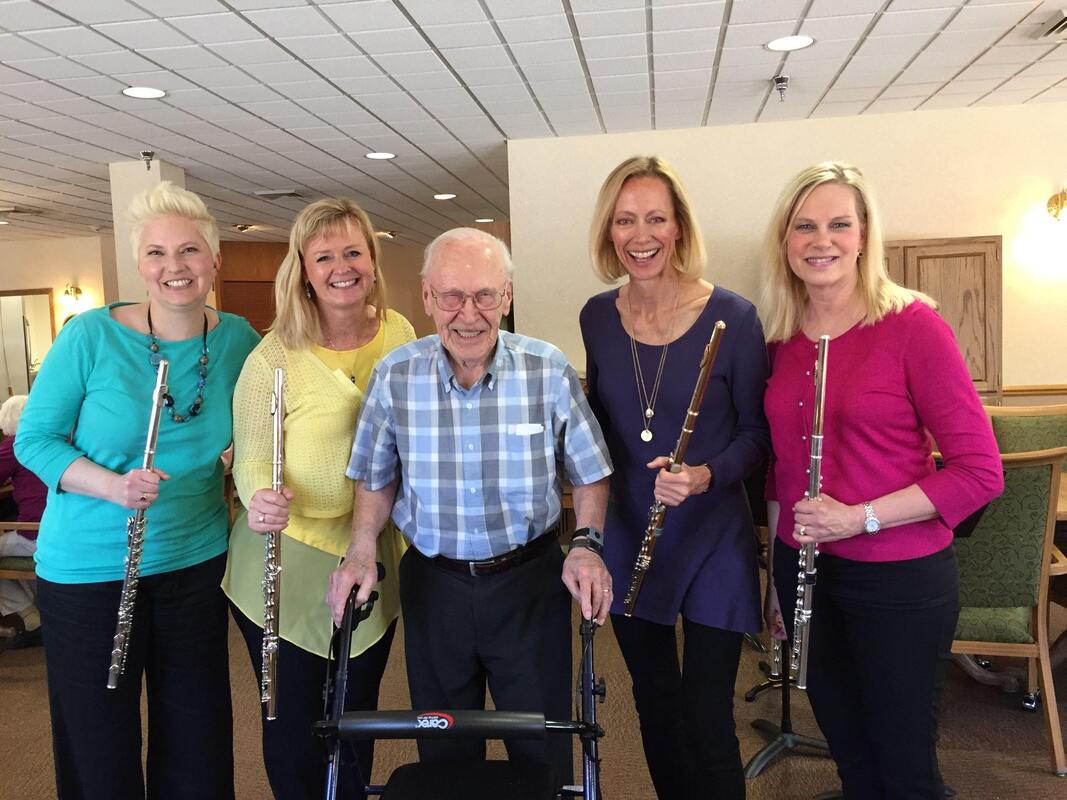 Erika, Kirstin, Erling, Peggy, and Deb at a Silver Winds performance at Eventide in 2017.
Our friend and mentor, Erling Linde (1923 - 2019), was an accomplished flutist and music educator in Moorhead, MN. A graduate of Concordia College and the Cincinnati Conservatory of Music, Erling was Principal Flutist of the Fargo-Moorhead Symphony for 32 years, an elementary and junior high band director, and Adjunct Flute Instructor at Concordia College.  The Silver Winds Flute Quartet owes its beginnings to a flute ensemble gig with Erling at his church on a Sunday morning in 2002. Some of the flutists in the ensemble were inspired to perform again, and a flute quartet was born.  Only a couple of the Silver Winds' members have changed over the years, and the group has continued to rehearse and perform regularly in the community for almost two decades. Erling did not perform regularly in the quartet, but you could always expect him in the audience - he was our biggest supporter, and showered us with accolades after each performance. It was always such a joy and honor to play for him. We are grateful for Erling and the inspiration he created through his passion for music and life.